After mainly having explored the nature and wild-life of his own Sweden, Sucksdorff this time took his cameras (for the first time loaded with colour film), his hand-picked crew and his imagination to Bastar, a little jungle village in the heart of India. Bastar is populated by Murias, aboriginals with a great urge to live happily together in peace. To live and let live… The story revolves around Chendru, a small boy who lives in Bastar with his grandfather, his cousin Ginjo and Ginjo´s wife, Riga, who is not a Muria. One day a leopard appears near the village. Chendru reaches for his bow but is stopped from shooting; it might be a bad omen. Maybe it is the same leopard that once killed Chendru´s father. The next day Chendru, again, spots a leopard, which triggers a series of dramatic events, involving the lives of both animals and human beings. 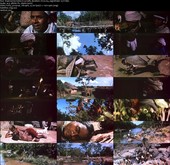