We find Reiko Ike once again cast as a tough schoolgirl who eventually has to band together with her enemies to upset the reign of their private Catholic high school administration where institutionalized sexual abuse is endemic. Tables are turned finally on the principal, various sanctimonious teachers as well as a visiting American principal, who drives a vulnerable virgin to suicide when he deflowers her! Ike teams up with a guy on his own quest for revenge and the climax sees the prinicpal and other adult evildoers publicly humiliated and exposed before the entire student body. 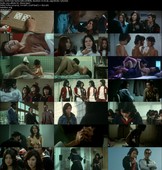