February 17 to March 3, 1860, inside Edo castle. A group of assassins wait by Sakurada Gate to kill the lord of the House of Ii, a powerful man in the Tokugawa government, which has ruled Japan for 300 years. They suspect a traitor in their midst, and their suspicions fall on Niiro, an impoverished ronin who dreams of samurai status, and Kurihara, an aristocratic samurai who befriends Niiro. Niiro longs to identify his father, knowing he is a high-ranking official who will disclose himself only if Niiro achieves samurai status. With American ships in Japan’s harbors, cynicism among the assassins, and change in the air, Niiro resolves to reach ends that may prove ephemeral. 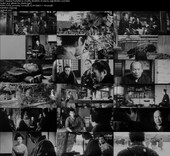