In the 70s Matteusz Gdula invented an acting method that was supposed to make every actor “shine”. Still, lots of his students die mysteriously and Gdula commits suicide. His method gets banned. Now: Stella, an ambitious, but rather untalented drama student, gets accepted at the “Matteusz Gdula”-school. When she bears witness to some strange occurrences, she gets drawn into the bizarre and deadly web that surrounds the dark secret of the school.. 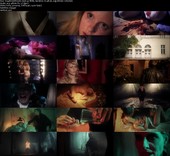