Antoine Brisebard, a famous comedy playwright, is struggling with financial difficulties and is preparing to sell his country villa to an English couple. What no one knows, however, is that Brisebard is actually a victim of blackmail since his wife Sylvie, a famous actress, is the daughter of a notorious robber-murderer. His extortionist is a malevolent criminal only known as Jo, who visits him often to pick up his hush money. But faced with certain ruin, Brisebard is preparing to do away with Jo once and for all, planning his deed under the guise of him trying to write the script for a crime play and consulting his friend, attorney Colas, for ideas of how to efficiently get rid of the body. He finally takes up the offer of one Tonelotti to erect a garden pavillon, whose foundation would provide the ideal hiding place for the corpse. On the night Jo is scheduled to arrive for his next payment, Brisebard awaits the arrival with a gun but is not able to pull the trigger, drops the gun 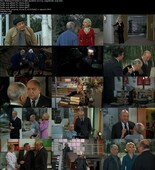