Japanese sixties comedy featuring a cunning female jewel thief named Black Lizard who tries to kidnap Sanaye, a wealthy jeweler’s beautiful daughter as part of a plot to steal the jeweler’s expensive “Star of Egypt” diamond. To thwart the planned kidnapping, the jeweler hires Japan’s number one detective, the brilliant Akechi. This sets off a dual between Black Lizard and Akechi as each tries to outwit the other. In the process, the two adversaries develop a mutual respect and affection for each other. Despite Akechi’s efforts, Black Lizard and her crew are able to kidnap Sanaye and gain possession of the “Star of Egypt”. Black Lizard takes Sanaye to her secret lair on a remote island which is populated by an eerie collection of naked human dolls. There Black Lizard plans to preserve Sanaye’s beauty forever by turning her into one of her dolls. As Sanaye’s doom quickly approaches, it is up to Akechi to save the day. 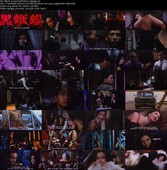